Firm Culture According to Desiree Ryziuk, Partner at Ogilvie LLP

When you are an in demand partner at a very successful law firm, you’d think you’d have a large ego but Desiree Ryziuk at Ogilvie LLP, does not.

She is whip smart but quick to deflect praise. When asked how she has made it to an envious standing at the firm, Ryziuk answers the question with two responses: (i) timing and; (ii) Ogilvie’s team of teams’ approach to doing business. Spending time with Ryziuk allows you to understand something important about her character; she listens intently and reflects thoughtfully before responding or making a decision. Although not offered by Ryziuk, it’s clear that the strength of her personality has also helped define her success.

Ryziuk is an outstanding lawyer. She started at Ogilvie as a student in 2010 and found her calling as a solicitor working on a team with Michael Elias QC. This is where the “timing” part of Ryziuk’s response comes in. Elias, a seasoned Partner when Ryziuk was a student, had a well-established practice and needed juniors as part of his succession plan. Dana Treasure, an associate working with Elias’s team, was on maternity leave. Ryziuk was able to fill in for Treasure and began taking on a significant amount of work for Elias. When Treasure returned from leave, Ryziuk had established herself. A bonus to this dynamic, Ryziuk recounts, is a friendship that forged between Ryziuk and Treasure while working together with Elias on his practice, which continues today.

Ryziuk had the benefit of strong mentorship and guidance from well-respected senior lawyers which has shaped her development. However, job mastery develops with experience and hard work but there is also an intuition one must apply when fitting into a firm and establishing a dependable and easy-to-work-with reputation. Timing worked in Ryziuk’s favour: Elias could advocate on her behalf from a senior level. But it takes wisdom to see opportunities where one can fill a need. Taking an opportunity and turning it into a career is what Ryziuk successfully accomplished.

Nurturing strong allies is what Ryziuk achieved with her relationship with Treasure. Early in her career, Ryziuk would drive to Treasure’s house at sunrise and they would bike together downtown to Ogilvie. Having a positive firm culture with friends and colleagues you can trust and that are looking out for you both personally and professionally can be a tremendous support. Strong personalities sometimes clash in a firm. Ryziuk conveys the importance of choosing a firm with a positive culture where you can build strong friendships with colleagues committed to seeing you succeed and not getting caught up in interpersonal issues that don’t serve your success or the success of the firm.

Ryziuk is now a mom to two young children and a strong leader at Ogilvie. She balances work and home and knows that having it all is a myth. This is where Ogilvie’s team of teams’ approach helps. When life demands that Ryziuk can’t address a work emergency, a team member that is versed in the file, can step in and support. The team of teams’ approach at Ogilvie offers flexibility and the ability for lawyers to seamlessly serve client needs that, at times, rear themselves day and night.

Culture is key at Ogilvie. Ryziuk is at the busiest stage of her life with a young family and demanding career. Knowing that her Ogilvie colleagues have her back will aid her achievement but underscoring it all is the balance Ryziuk strikes, blending her fierce intelligence, strong intuition and a healthy sense of mirth. 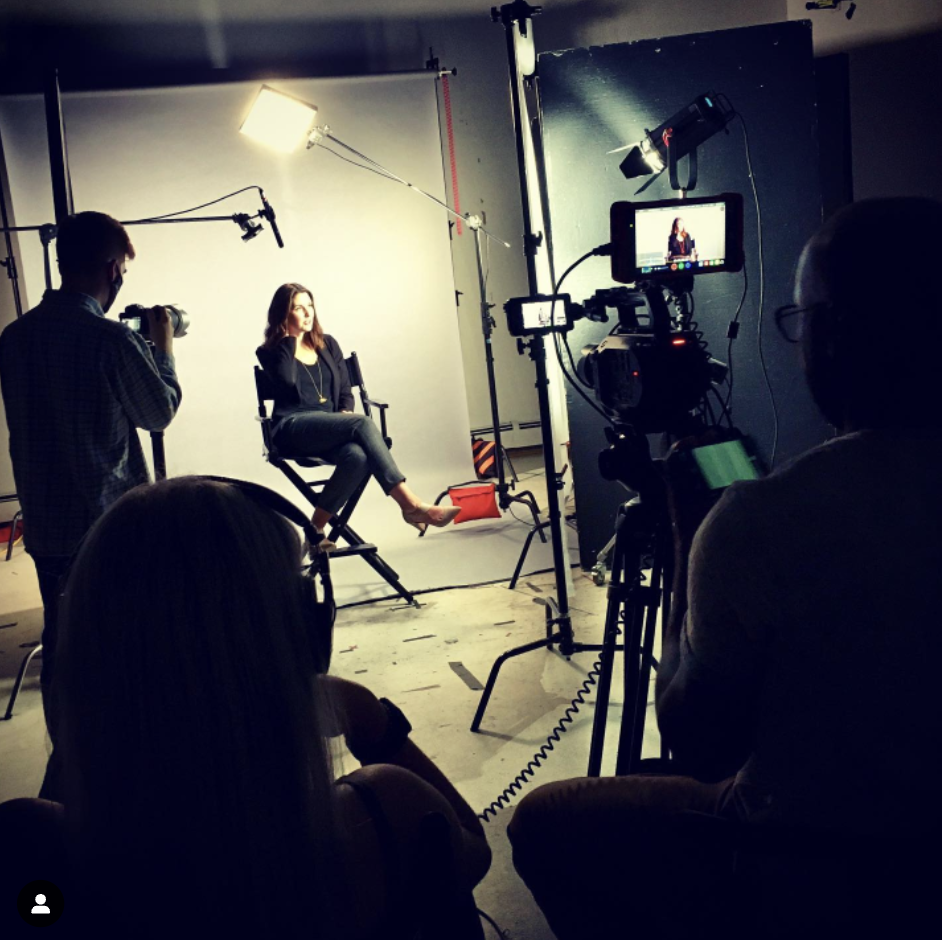 Ogilvie Partner Desiree Ryziuk preparing to shoot the sponsorship speech 'Ogilvie is proud and honoured to be a Silver Sponsor', celebrating EDify’s top 40 class of 2020 @edify_edmonton